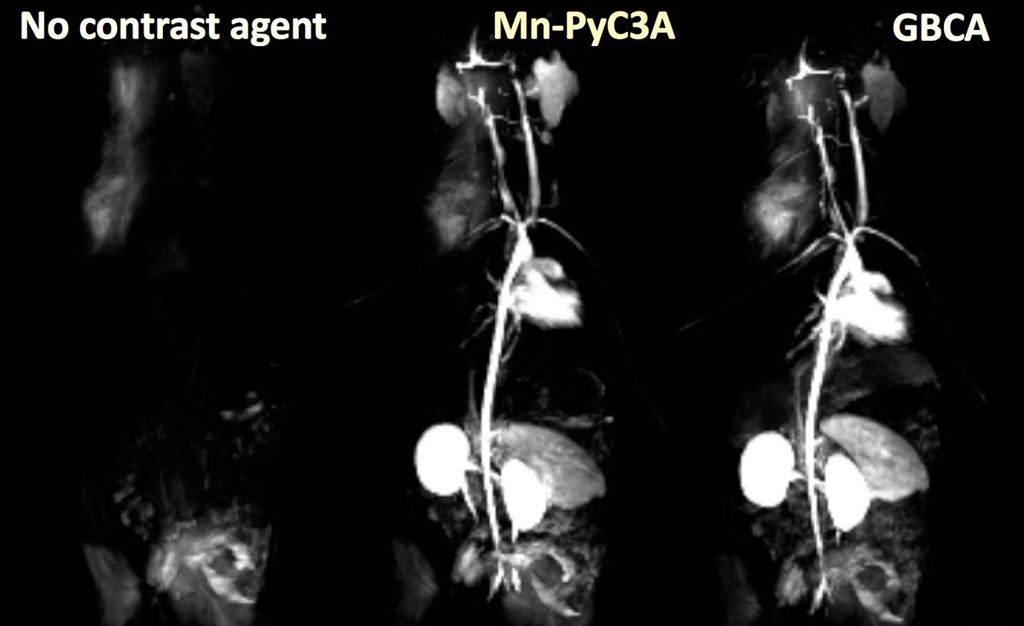 Developed at Massachusetts General Hospital (MGH; Boston, USA), Harvard Medical School (HMS; Boston, MA, USA), and the Institute for Innovation in Imaging (i3; Boston, MA), Mn-PyC3A takes advantage of the fact that unlike gadolinium, manganese is an essential element that is naturally found in the body. The Manganese in Mn-PyC3A is tightly bound to a chelating agent, which prevents it from interacting with cells or proteins in an adverse way, and also allows for rapid elimination from the body after the imaging exam.

For the study, the researchers compared the efficacy of Mn-PyC3A to two state of the art GBCAs in detecting tumors in two mouse models, breast cancer and metastatic live cancer. They found that the tumor contrast enhancement provided by Mn-PyC3A was comparable to the performance of the two GBCAs. They also found that the fractional excretion and elimination of Mn-PyC3A in a rat model was superior to that of GBCAs, with 85% eliminated into the urine and the remaining 15 percent eliminated in the feces. The study was published on July 25, 2019, in Investigative Radiology.

“About 40 percent of MRI procedures use a contrast agent to produce a signal that can detect cancers, diagnose aneurysms or arterial narrowing, or identify the area of a heart damaged by a heart attack,” said senior co-author Peter Caravan, PhD, co-director of i3. “We estimate that around two million contrast-enhanced scans are not performed in the United States every year because of the inability to use GBCAs in patients with poor renal function. Mn-PyC3A could make MRI safer.”

There are two forms of GBCAs; the less stable linear GBCAs, which are more toxic, and the more stable macrocyclic GBCAs, which is safer. It is has been established that gadolinium deposits in three main brain areas, the dentate nucleus of the cerebellum, the globus pallidus and the pulvinar. Outside of the brain, gadolinium deposition occurs in the kidney, where it can cause nephrogenic systemic fibrosis, a scleroderma-like disorder; this, however, occurs mostly in people with renal impairment. Harm from gadolinium deposition has not been established.

Institute for Innovation in Imaging