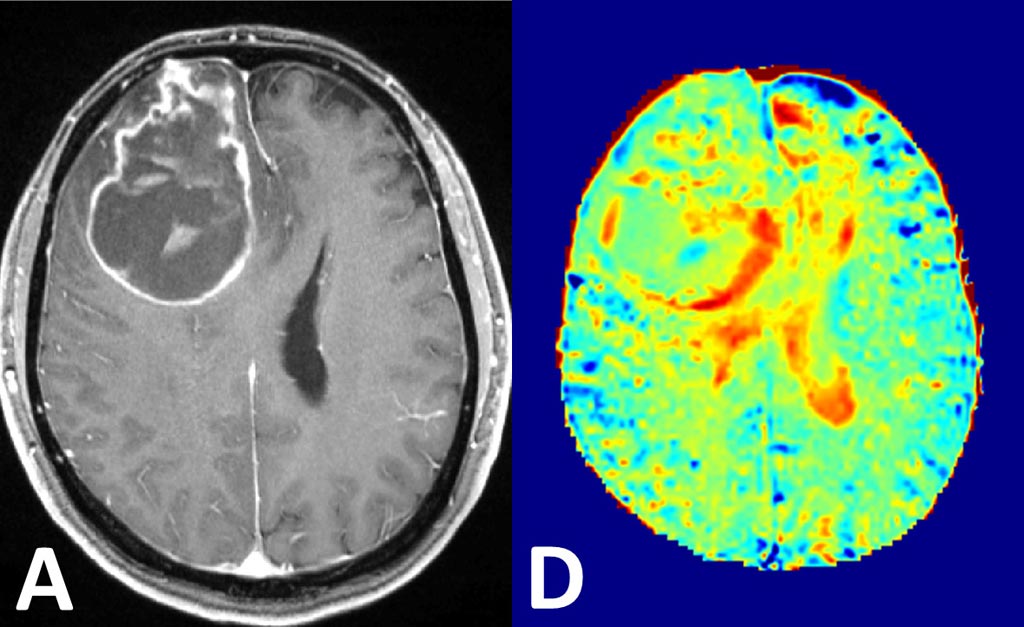 T1ρ-weighted dynamic glucose-enhanced (DGE) MRI was performed with injection of 100 mL of 20% d-glucose via the cubital vein. Glucose enhancement, given by the relative signal intensity change, was then quantitatively investigated in brain gray matter versus white matter in the healthy volunteers, and in tumor tissue versus normal-appearing white matter of patients with glioblastoma. The median signal intensities of the assessed brain regions were then compared.

The results demonstrated that in healthy volunteers, the median signal intensity in basal ganglia gray matter was significantly increased compared with that in white matter tissue. But in the glioblastoma patients, the median signal intensity in the glucose-enhanced tumor region, as displayed on the T1ρ-weighted DGE images, was significantly higher than that in contralateral normal-appearing white matter, indicating the pathophysiologically increased glucose uptake that occurs in human brain cancer. The study was published on June 23, 2017, in Radiology.

“We do not know yet how the shares of measured glucose are distributed between vessels and extracellular spaces on the one hand, and the cell interior on the other,” said study co-author radiologist Heinz-Peter Schlemmer, MD, PhD, of the DKFZ division of radiology. “If we can confirm that substantial signal levels originate from glucose in the cell interior, this would be important additional information for tumor imaging and functional MRI. This could enhance therapy planning and monitoring.”

MRI contrast agents enhance signals in blood vessels and in spaces between cells, but do not reach the interior of the cell; by contrast, glucose is taken up and then broken down in the body cells, and tumor cells are particularly hungry for glucose in order to feed their high-energy needs. As glucose is found at much lower levels in the body, magnetization transfer effect is used to reinforce the glucose signal by transferring the signal from glucose protons to bodily water, which is measured in MRI. The amount of glucose needed corresponds to about five sugar cubes.