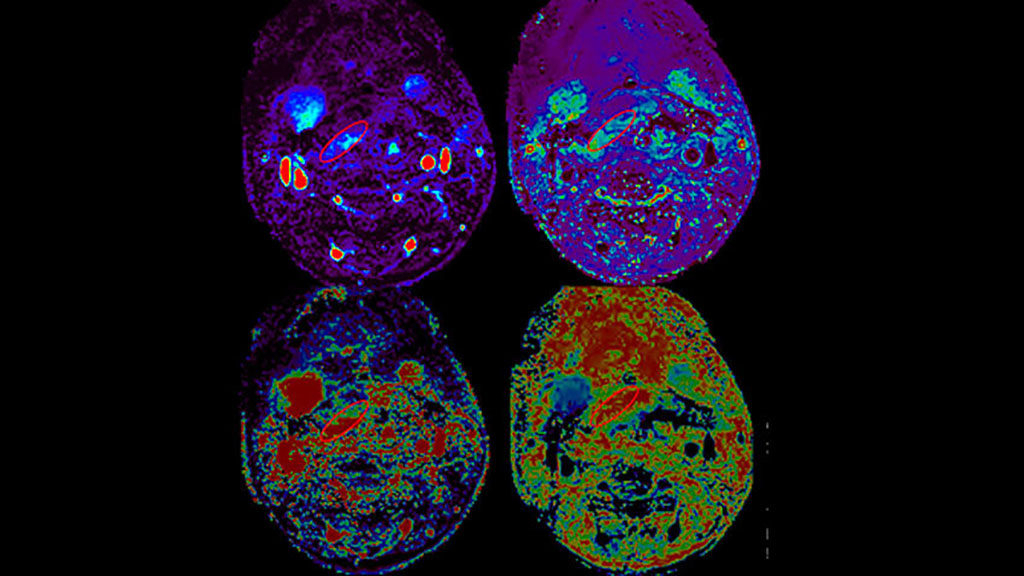 Image: A composite picture from MR perfusion of a free flap demonstrating measurements made within the flap (Photo courtesy of Michigan Medicine)

When a patient with head and neck cancer has surgery to remove it, they often need reconstructive surgery in the form of a “free flap”, which is skin and tissue taken from a different part of the body and connected to the blood vessels of the wound in need of repair. This free flap method, called microvascular reconstruction, carries around a 10-40% risk of wound complications, with 10% of cases requiring another surgery. Currently, most surgeons use ultrasound to assess viability for free flap reconstruction with techniques known as Doppler and skin paddle. Those methods often are unable to evaluate deeper aspects of the flap, or air and blood products cause interference in visualization, which affects how well clinicians can analyze a flap’s viability. Now, a study has found that early postoperative CT scans and MRIs can help predict whether a flap will fail, which could allow surgeons to intervene earlier.

In the study, a team of researchers from the University of Michigan Health (Ann Arbor, MI, USA) analyzed 19 patients who had successful free flap reconstruction, as well as five who had wound failure, between January 2016 to mid-2018. They found that both CT and MRI perfusion techniques showed significant differences between the two patient groups. Researchers were not able to compare the two methods to ultrasound techniques or each other due to the small sample size. They hope to accomplish those comparisons through a larger future trial.

“All patients who have this procedure can be investigated with non-invasive post-operative CT or MRI perfusion, and these two methods show a lot of promise as accurate biomarkers of predicting free flap viability,” said Ashok Srinivasan, M.D., FACR, a neuroradiologist at University of Michigan Health.

“This pilot research shows us that these models work, as all areas of the flap can be assessed using CT and MRI, unlike doppler and skin paddle where some areas may be blind to evaluation,” said Yoshiaki Ota, M.D., a neuroradiology fellow at University of Michigan Health. “We know that using CT and MRI could help shorten a patient’s hospital stay or avoid a prolonged hospitalization, and now we need to look further at which is more effective and cost-effective.”