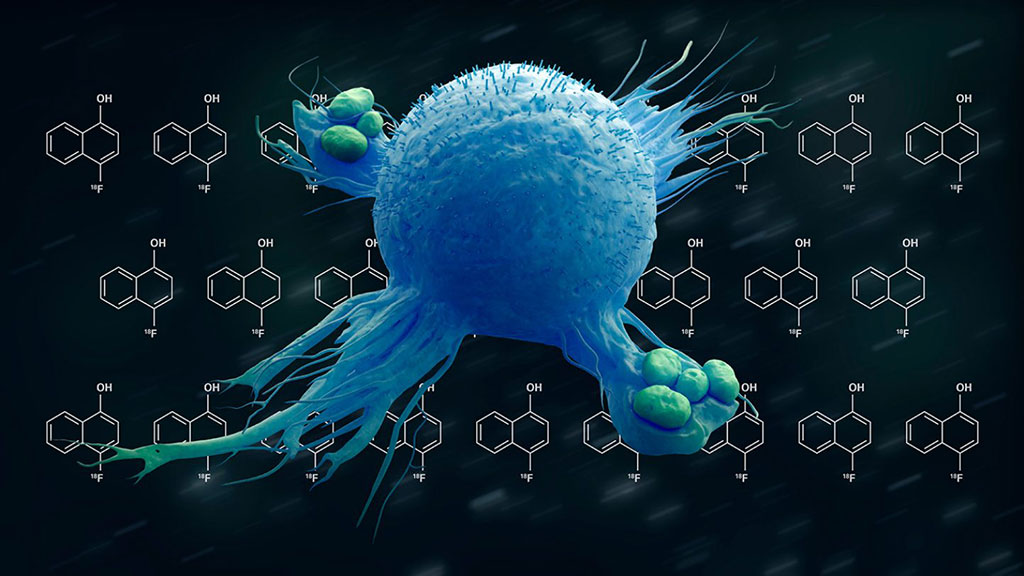 Researchers at The University of Texas MD Anderson Cancer Center (Houston, TX, USA) have developed a new radio-labeled molecule capable of selectively reacting with certain high-energy radicals that are characteristic of innate immune activity, which may allow a non-invasive approach to monitor inflammation in real time by positron emission tomography (PET) imaging. The researchers have taken advantage of new chemistry techniques to synthesize 4-[18F]Fluoro-1-Naphthol ([18F]4FN) as a novel reporter of myeloperoxidase (MPO) activity - a key enzyme active in the innate immune response. The molecule may be able to pinpoint areas of inflammation in a variety of clinical settings, such as inflammatory diseases, infections and immunotherapy-related side effects.

The research team focused on MPO activity to develop a redox-tuned reporter specific to innate immune activity. Using newly developed chemistry techniques, the team was able to synthesize [18F]4FN as a labeled molecule to selectively bind nearby proteins and cells when [18F]4FN has been oxidized by MPO plus hydrogen peroxide, but not hydrogen peroxide alone. The researchers evaluated the potential uses of [18F]4FN as an in vivo PET imaging tool in several laboratory models of inflammation. The molecule was able to successfully highlight inflammation from acute toxic shock, arthritis and contact dermatitis, ailments known to be mediated by activation of innate immunity.

In addition, their results suggest [18F]4FN is a more specific and robust reporter of inflammation than other clinically utilized PET imaging agents, such as fluorodeoxyglucose ([18F]FDG). The research team is in discussions with clinical collaborators to test specific applications of [18F]4FN. An initial study, now under Food and Drug Administration review for Investigational New Drug registration and Institutional Review Board approval, will evaluate [18F]4FN as an early biomarker of immune-related adverse events in patients being treated with immune checkpoint inhibitors.

“There has been a long-standing interest in imaging inflammation and redox in general, but most current approaches generate high levels of background noise from biological processes that generate lower-energy radicals,” said David Piwnica-Worms, M.D., Ph.D., chair of Cancer Systems Imaging. "Our molecule is tuned toward inflammation mediated by high-energy radicals, offering the potential to selectively monitor activation of innate immunity.”

“We need to verify this PET imaging agent in clinical studies, but it certainly has the potential for broad applications that could benefit patients across all kinds of diseases and clinical scenarios,” Piwnica-Worms added. “A tool like this could be used to identify multi-focal hotspots of inflammation, allowing physicians to intervene before disease progression or to follow the resolution of symptoms during therapy.”

For the last decade or so, scientists have been making Magnetic Resonance Imaging (MRI) faster using a technique called compressed sensing, which uses the idea that images can be compressed into smaller... Read more