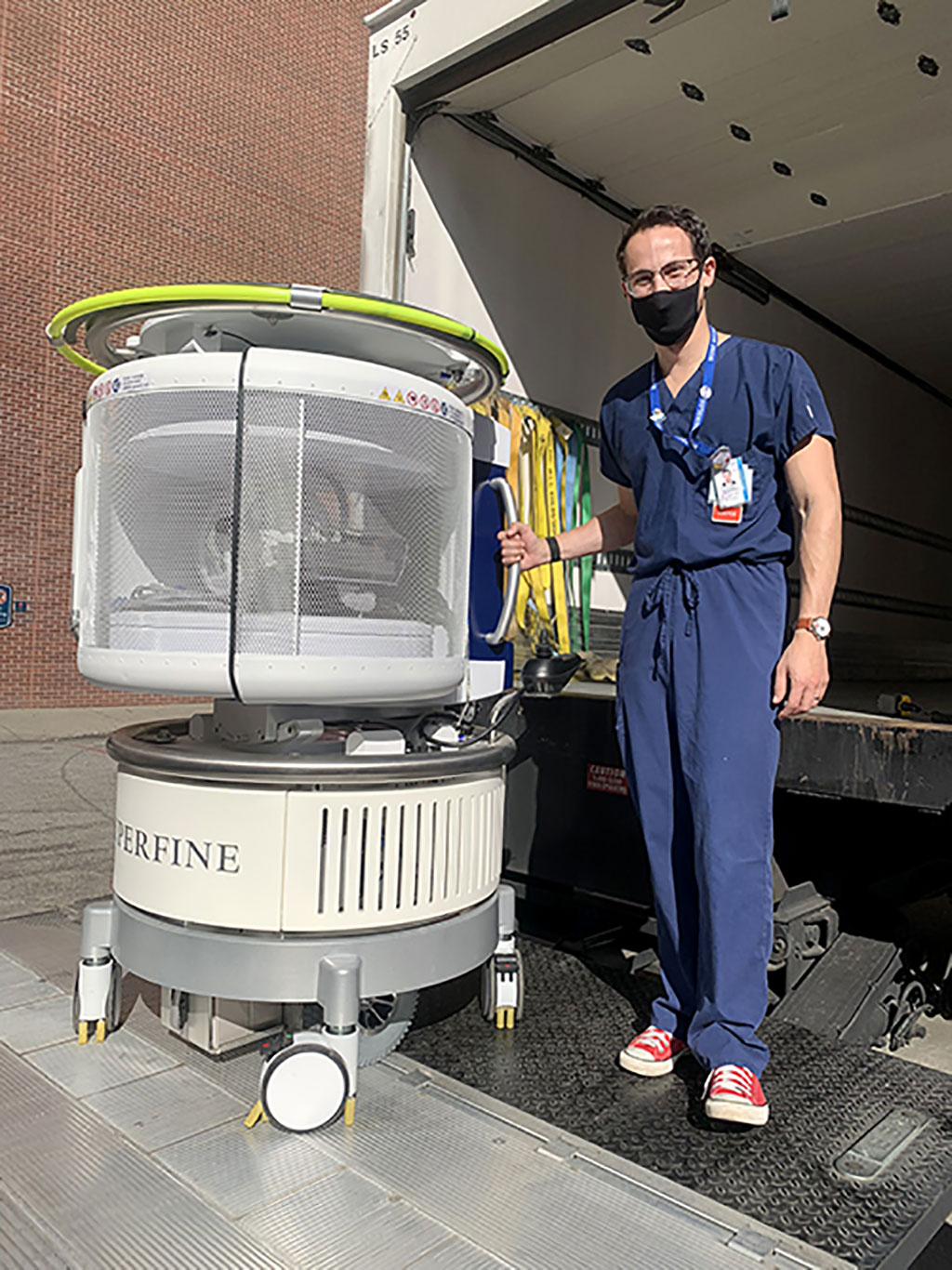 A new portable MRI system that is likely to be used in space could also be used to take brain scans inside stroke patients inside their home or the back of the ambulance.

Doctors at the Medical University of South Carolina’s Comprehensive Stroke Center (Charleston, SC, USA) used a portable MRI developed by Hyperfine (Guilford, CT, USA) to test whether an MRI scan could be successfully completed in the back of a moving ambulance.

Minutes matter for stroke patients when the brain is being deprived of oxygen. Reducing the time before treatment begins isn’t simply a matter of reducing the number of stroke deaths but also about reducing the severity of disabilities for those who survive. For every 15-minute reduction in ‘door-to-needle time’ there is a significant improvement in patient outcomes, including reduction in disabilities and reduction in mortality. Doctors at MUSC Health constantly work with their community hospital colleagues on initiatives to cut down the steps that need to happen between the time a stroke patient is wheeled through the ambulance bay until treatment can begin – for example, by developing a TeleEMS program so emergency medical technicians can consult with stroke specialists while inside a patient’s home or the back of the ambulance.

However, some things still need to happen at the hospital before treatment can begin, though, like scans of the brain to confirm a stroke and determine what type it is. If it were possible to do an MRI scan in the ambulance, then not only would doctors be better prepared when the ambulance arrived, but the stroke specialists could determine whether the patient could be treated at a community hospital or would need to go directly to a specialized stroke center.

Hyperfine’s portable MRI is designed to be wheeled around a hospital to conduct brain scans at the bedside for patients who cannot be moved. It weighs 1,400 pounds and is roughly the size of an office printer turned on its side, making it smaller than the average MRI machine. The portable MRI features automatic motion correction and as the MUSC team drove along in the ambulance, it could see that as the ambulance bounced over the roads the scanner actually moved. The team wanted to demonstrate whether the portable MRI would still be able to function and acquire diagnostic images in a moving vehicle and was amazed to see that the scanner itself was able to sense the motion and correct that in real time, enabling crystal clear images.

Some areas have started deploying mobile stroke units, which are ambulances with CT scanners, a critical care nurse and a CT technician in addition to a paramedic. While these units have been shown to improve patients’ outcomes by decreasing the time to treatment, they are expensive at USD 600,000 to USD 1 million per unit. A portable MRI machine would be a fraction of that cost and would bring the advantages of MRI scanning. MRI, unlike CT, does not use radiation, thus eliminating radiation exposure to the patient or the first responders.

Additionally, an MRI is also a more accurate diagnostic tool for stroke. It can show smaller blockages, and, in the case of strokes caused by blood clots, it would allow doctors to determine whether a patient needed the clot-busting drug tPA, which can be administered at community hospitals, or a thrombectomy, a surgical procedure to remove the clot. The current triage system calls for patients to first go to a tPA-capable center and receive tPA. Although tPA works well for small blood clots, it is much less likely to work on large clots.

“So, if you can imagine, if a patient has a large clot in the brain, they go to the tPA center and get tPA and then transfer here. By the time they get here, there is a very good chance that those patients will no longer be eligible for thrombectomy because there's already so much damage,” said Sami Al Kasab, M.D., associate medical director of the MUSC Health Teleneuroscience Program.