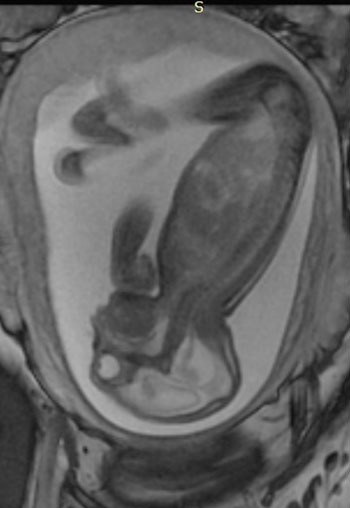 Image: A side view of a fetus with hands and clubfeet, enlarged cerebral fluid space, cerebral ventricles dilation, less brain tissue, absence of brain cortical gyri, and a poorly developed cerebellum (Photo courtesy of RSNA).
The results of three new studies into the effects of the Zika virus disease in Brazil revealed multiple types of congenital brain damage.

In the second study researchers analyzed scans of adults, and newborn babies with various neurological disorders, and of pregnant women with rashes indicative of a Zika infection. There were common Magnetic Resonance Imaging (MRI) findings that included enhancement of certain spinal and facial nerves. In addition, the researchers found orbital injuries and changes in the anatomy of brain tissue in the MRI scans of the newborn babies.

A third study consisted of ultrasound, and fetal MRI scans in pregnant women suffering from a Zika infection. After the babies were born, ultrasound, CT and MRI scans revealed that more than half of them had lost brain tissue volume, or suffered from microcephaly, brain calcifications and other structural changes. The researchers used 3-D virtual and physical skull models for their research.

Author of the first study, Natacha Calheiros de Lima Petribu, MD, Department of Radiology, Barão de Lucena Hospital (Recife, Brazil), said, "We live in Pernambuco, a state in northeastern Brazil, which had the highest number of patients with microcephaly during the Zika outbreak in our country. Our study proves that Zika virus infection can cause congenital brain damage in babies with and without microcephaly."