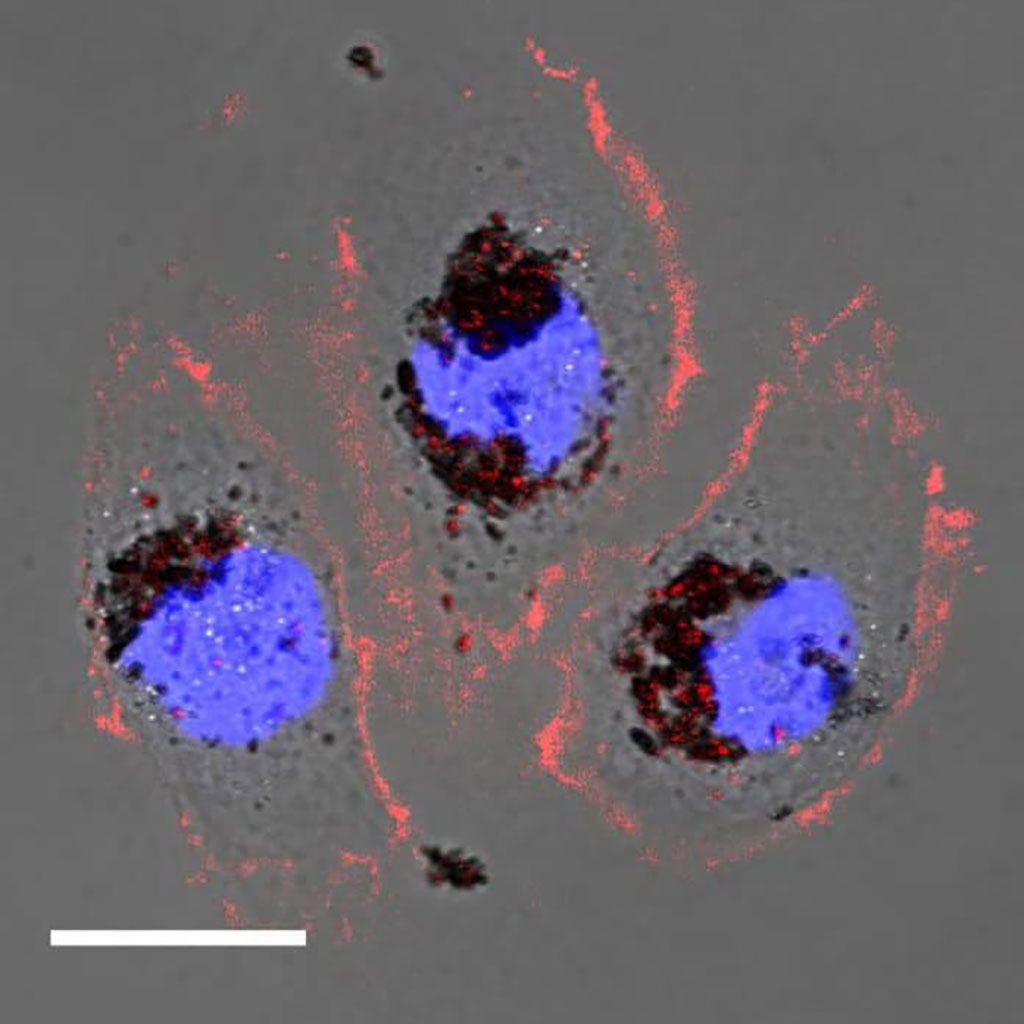 Image: Human cells treated with Selenomelanin nanoparticles (Photo courtesy of NU)
A synthesized form of melanin enriched with selenium could shield human tissues from X-rays during medical treatment or spaceflight, according to a new study.

Developed at Northwestern University (NU; Evanston, IL, USA), the University of California, San Diego (UCSD; USA), and other institutions, the new material is called Selenomelanin, and is an analogue of pheomelanin (the pigment responsible for red hair, which contains sulfur), that has been shown to absorb X-rays more efficiently than the more common eumelanin, which gives black and brown hair their color. The researchers hypothesized that enriching pheomelanin with selenium instead of sulfur would provide better protection against X-rays.

After synthesizing Selenomelanin, they then used it to treat neonatal human epidermal keratinocytes (NHEK); for comparison, they prepared cells treated with synthetic pheomelanin and eumelanin, as well as cells with no protective melanin at all. All cells were subjected to high-dose X-ray irradiation, at levels that would be lethal to a human being. They found that only those cells treated with Selenomelanin still exhibited a normal cell cycle, and did not undergo G2/M phase arrest. The study was published on July 8, 2020, in the Journal of the American Chemical Society (JACS).

“Melanin may act as a repository for selenium, helping ensure that organisms benefit from it. Our results demonstrated that selenomelanin offers superior protection from radiation,” said senior author Nathan Gianneschi, PhD, of NU. “We also found that it was easier to synthesize selenomelanin than pheomelanin, and what we created was closer than synthetic pheomelanin to the melanin found in nature. Selenomelanin may play an important role in how selenium is metabolized and distributed biologically. It's an area for further investigation.”

Melanins are a family of heterogeneous biopolymers found ubiquitously across plant, animal, bacterial, and fungal kingdoms where they act variously as pigments and as radiation protection agents. There exist five multifunctional, structurally and biosynthetically incompletely understood varieties of melanin: eumelanin, neuromelanin, pyomelanin, allomelanin, and pheomelanin.