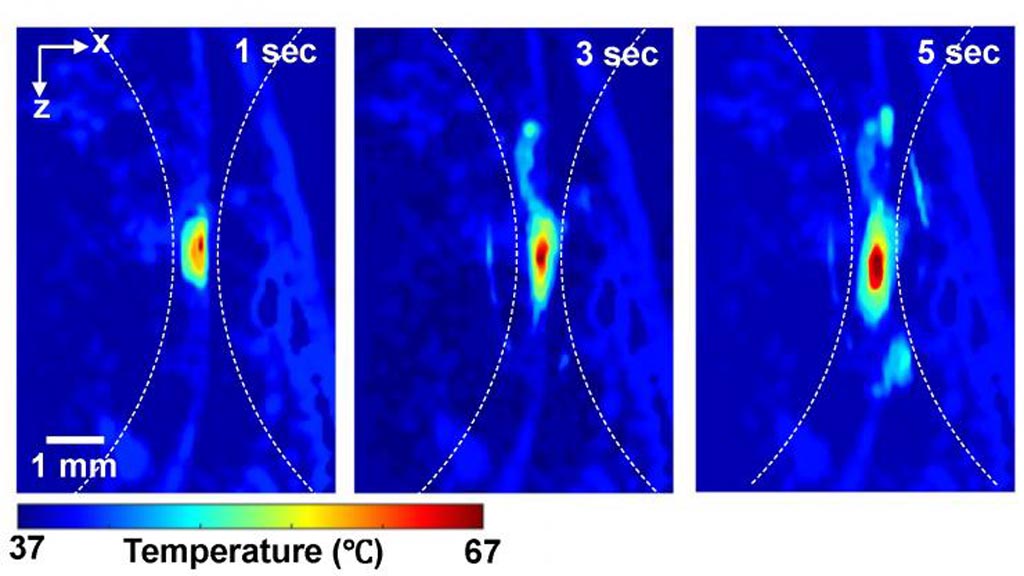 Developed by researchers at Tsinghua University (Beijing, China) and Duke University (Durham NC, USA), TEMPT illuminates the tissue with a burst of nanosecond laser pulses, exploiting the temperature dependence of lingering thermal energy which is probed by corresponding Photoacoustic (PA) signals acquired within the thermal confinement. A self-normalized ratiometric measurement then cancels out temperature-irrelevant quantities to estimate the Grüneisen parameter.

Absolute temperature can then be evaluated, given the tissue’s temperature-dependent Grüneisen parameter, mass density, and specific heat capacity. Unlike conventional PA thermometry, TEMPT does not require knowledge of the tissue’s baseline temperature, nor its optical properties. The system has been evaluated on tissue phantoms at 1.5 cm depth, as well as during focused ultrasound treatment in mice. The researchers expect that TEMPT will soon find applications in cancer thermotherapy. The study was published on February 12, 2019, in Optica.

“When the laser hits a cell, the energy causes it to heat up a tiny bit and expand instantaneously, creating an ultrasonic wave. It's analogous to striking a bell to cause it to ring,” said senior author biomedical engineer Junjie Yao, PhD, of Duke University. “The conversion efficiency between light and sound is temperature-dependent, so we know it’s possible to measure temperature by listening to soundwaves generated by light.”

“The ability to more precisely measure the temperature of tissues deep in the body has important implications for treating cancer with thermal ablation, which involves heating up tumor cells using HIFU or radio waves until they die,” added Dr. Yao. “If the temperature is too high, we can damage the surrounding tissues, and if it’s too low, we’re not causing enough damage to the tumor. TEMPT could be incorporated into the treatments to hone in on the perfect temperature.”

Photoacoustic imaging is based on non-ionizing laser pulses fired into biological tissues; some of the energy delivered is converted into heat, leading to transient thermoelastic expansion and subsequent wideband ultrasonic emission, which can be detected by ultrasonic transducers and analyzed to produce images. The magnitude of the photoacoustic signal is proportional to the local energy deposition, which can be demonstrated by optical absorption contrast on the images of the targeted areas.